skip to main | skip to sidebar

Fixed that for you...

Sometimes comics can get it wrong and really just need a slight push in the right direction. The comic's name is SMBC and it is number 1609. Just made a few slight alterations to let the truth ring through. 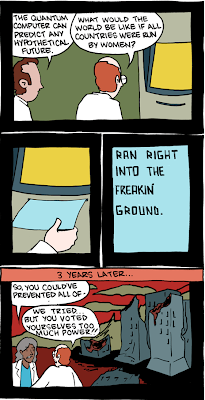 It’s been a while since I’ve written or even posted great pieces by someone else, so today I’m going to do some of the latter.

Today I read an interesting piece by Rex Patriarch entitled “Going Your Own Way as a Mental Martial Art” that I found very interesting. I commented on his site, but I don’t think my input is important enough to warrant being next to the essay I’ll be reposting, but it’s still on his site.

“Going Your Own Way as a Mental Martial Art

The idea of going your own way which is basically getting fed up with the double standard, self serving attitudes of women and the stacked deck against men in the legal system isn’t necessarily the all or nothing concept held by some and the problem isn't so much that the grapes are sour as it is the venom is sweet but in the end it's still freaking poison.

But a man does not have to go completely off the radar or totally ban women from his life to go his own way. No, I think going your own way is more of a process where there are levels or degrees in which a man goes to whatever level suits him more or less. Sort of like the way there are different colored belts in a martial art for those who progress to whatever level they are able.

The theory of the belts is not just that they got dyed in a series of colors from white to black but that the belts became dirtier as a man’s training and experience progressed. I thought this concept could be an appropriate comparison to the way a man’s knowledge about the true nature of women can become more jaded or dirtier as his experience with them progresses in life.

This knowledge about the true nature of women is so harmful to their agenda of the entire universe spinning around their vagina that they will stop at nothing to keep young men from coming into this knowledge. This is why women fight so fiercely using all manner of shaming and vitriolic hatred towards any man who exposes the truth about them. The idea that women would have to be truly self sufficient and independent without aid of men or government terrifies them. They absolutely cannot have the slaves leaving Plantation Matriarch otherwise it would be to their own peril.

Well that’s their problem not mine. I didn’t start this insane cultural war against men but make no mistake there is a war going on. It’s not by your choice or mine but the war was already declared a long time ago even before some of you were born so you better wake up to the reality if you want to survive it.

There are many different ways men are fighting this gender war. Some men are beating their heads against the wall trying to be good husbands and fathers only to lose everything in the end anyway, some men become players or pick up artist raiding the supply of enemy vagina while it’s fresh, some men flat out turn gay looking to other men for companionship and then there are those who go their own way being somewhere between the faithful husband and the jerk who knocks up the wife of the faithful husband. That is the area I like to live my life in. Somewhere in the area away from the beta providers, the gays and the jerks.

This area of going my own way can be described as a mental martial art complete with its own color coding depending on what level a man reaches. This of course is just a system I made up based on my own experience. You can use it to compare it with your own life, see where you are at and maybe add new levels to it if you like.

White Belt – This is the first level. You may be in a LTR and or shacking up but having looked around and seen the destruction you don’t give in to the pressure of getting down on one knee and putting an engagement ring on her finger. That is for beta providers who drank the Kool Aid and are ready to sign their life away. You know once you make that mistake the good times are over. The change that will take place will be immediate. She will go from loving companion to bridezilla to angry shrew to bat shit crazy falsely accusing you of anything her imagination can come up with. You will be a 911 call away from getting beaten and tazered to death from White Knights in blue uniforms. No way. You already have one foot out the door and you are keeping it there until it’s time to bolt.

Yellow Belt – Having been through the temper tantrums, listened to the question over and over “Where is this relationship going?” sat through the “We need to talk” moments you wise up and moved out. You haven’t completely kicked her ass to the curb but she is getting to be more of a pain in the ass than she is worth so you put her on ice to see what happens. You may be called yellow for refusing to commit but your gut instinct is to self preservation. This is a dangerous level because she is losing control and knows it. This is where they go for getting pregnant. Be very careful here or it’s 18 plus years of child support for you.

Orange Belt – You made it. You didn’t get suckered into one last drunken sex marathon so she could get knocked up or you may have insisted on a DNA test when she did but tests proved that it wasn't yours. Either way you dodged the bullet. You have finally lost interest in her control issues and completely cut off contact. Now vowed never to make the mistake of letting one of them move in with you again. The freedom is just too sweet to give up when you never know when the mask will come off and she will turn up the heat on you.

Green Belt – Not wanting to be in another LTR but you still spend time with other women thinking maybe there might be one out there that could be worth the effort. There still could be greener pastures. Having been burned before you don’t let them stay over at your place or give them the key to your door. You know better than that now. Anytime spent with chicks are done at their place or some other location but never at your place.

Blue Belt – You been with a few women since the end of your last LTR. You have seen the extreme so you can recognize the subtle. You are not so easily fooled and there is a pattern developing. It’s starting to sink in now that women are all pretty much the same. There is nothing special about any one of them except that each and every one of them thinks she is special. You may even be getting the blues about this knowledge wishing you didn’t have it but you can’t go back. There is no blue pill that you can take to make it all go away. What you know is what you know and there is no such thing as Not All Women Are Like That because they are.

Brown Belt – Having gotten over the blues that All Women Are Like That you discover there is way, way more to life than you ever noticed before. Attracting women to your life is no longer important to you. They can come or go you just don’t care anymore. Having all of your time and energy to yourself you can get back to earth and focus on what’s important to you and not on what some chick thinks is important to you.

Black Belt – It’s been ten or more years since the end of your last LTR. You have started a new business, career or some other venture that is succeeding because you don’t allow women anywhere near it. Women are dream killers and they are not allowed to touch yours. You may have even given up dealing with women in business or in your personal life to the greatest extent that you can. Life is bliss as long as your health holds out and you even notice that has gotten better. All the bullshit about how behind every successful man is a good woman is proving to be the total lie that it is. You realize that some men succeed despite a woman in their life but it is much easier to do without one trying to drag you down.

And there you have it, my version of going your own way as a martial art.

Anyone that calls you a loser for practicing the art of going your own way because you decided to do what is in your best interests for a change instead of a woman’s can take on all the wives and or girlfriends their heart desires. In fact if cycling through as many women as you can is your goal in life you should be happy with the choice I made in mine and encourage others to do the same as I did.

But the real reason other men have a problem with going your own way is the subject of another post.”

Fairly good, I’d say, I think we can all learn from such a root-of-the-issue interpretation.
Well done, Rex!
Posted by Amateur Strategist at 9:59 PM 1 comment:

Dalrock in the Suburbs

Recently Dalrock had a lot to say about a particular weekly somewhat published by match.com entitled "Single in the Suburbs". Despite that the weekly column reads as a fantasy that likely has the "eat pray love" effect on the happily-married-women-who-apparently-don't-know-they're-actually-unhappy-yet crowd.

In any case, Dalrock makes a much better case than I can reflect from him, so in without further adue, Dalrock's Response to "Single in the Suburbs.

I do gotta say that from what Dalrock has reflected on sounds like perhaps some of it was true, the down-and-out parts, but then when the novelist realized how downer the piece was, she decided to make the ending nigh-impossible (indeed, impossible to happent to any and all who follow her "advice").
Posted by Amateur Strategist at 3:02 AM No comments: